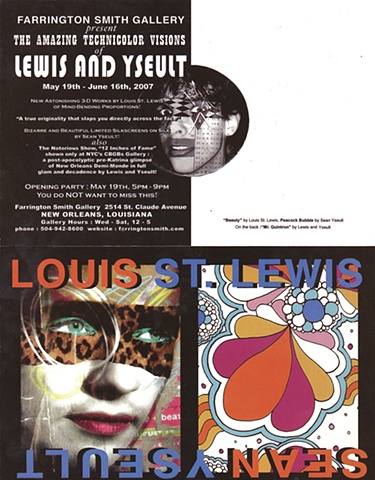 We all know artists, or at least people who think of themselves as artists. But when you run across the real deal, they stand out from the competition like comets in the night sky, flamboyantly extravagant, extreme and unforgettable. Such is the case with the artistic duo of St.Lewis and Yseult. New Orleans residents will recognize the name of Sean Yseult as the multi-talented bassist for the arena rocking band White Zombie, who has made New Orleans her home now for several years and has as her residence a garden district manse as gothic as they come. No stranger to success, Ms. Yseult has jammed on David Letterman and taken drugs with Dr. Leary. Her home office is filled with golden records and awards, not only for her musical career, but for her stylish modern silk scarves which are sold in exclusive boutiques worldwide. Her fellow classmate from the North Carolina School of the Arts, Louis St.Lewis took a different path in the arts but his history is just as interesting. St.Lewis has discussed color theory with Paloma Picasso, been photographed and praised by pop saint Andy Warhol, sketched in the nude by artist Robert Indiana, lavished with praise by artist Judy Chicago and lives in the type of creative decadence and self imposed hedonism that would make Oscar Wilde prick up his ears. Together and collaborating in the visual arts nearly 30 years after they first met, the pair are a formidable two-headed monster of artistic experimentation and wit.

The show, which balances almost equally the solo works of the two artist with their joint creations, is at once surprising and surprisingly logical. Both artists posses a keen eye for design, in fact it is the eye in both that is more talented than the hand. Both artists rely on machines as surrogate studio assistants, more interested the product than the path to getting there. Yseult delights with her bold patterns and lush colors printed on silk, St.Lewis it seems can run anything through a computer and create magic. His large scale mono-prints created with transfered printer ink are modern day direct descendants of Warhol... Jake, Heath, and President Bush never looked so effortlessly modern. When the Yseult-St.Lewis worlds colide, the effect is of another artist entirely, the sleek purity and craftsmanship of Yseult with the eccentricity and unbridled imagination of St.Lewis. A match most definitely made in artistic heaven.