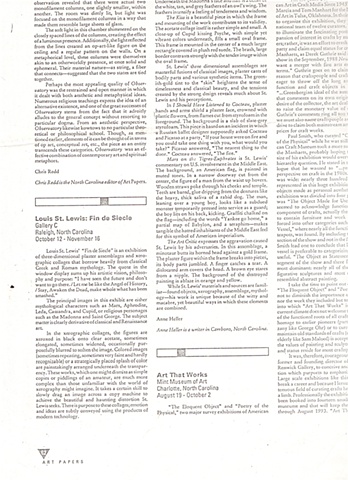 ARTPAPERS review of Louis St.Lewis Louis St.Lewis :Fin de Siecle Anne Heller ARTPAPERS Louis St.Lewis’ ” Fin de Siecle” is an exhibition of three-dimensional plaster assemblages and xerographic collages that borrow heavily from classical Greek and Roman mythology. The quote in the window display sums up his artistic vision, philosophy and purpose : ” I have seen the future and don’t want to go there. Let me be the angel of history, Stay, Awaken the dead, make whole what has been smashed.”

The principal images in this exhibit are either mythological characters such as Mars, Aphrodite, Leda, Cassandra and Cupid, or religious personages such as the Madonna and Saint George. The subject matter is clearly derivative of classical and Renaissance art.

In the xerographic collages, the figures are printed in black onto clear acetate, sometimes elongated, sometimes widened, occasionally blurred to soften the image. Colored images ( sometimes repeating, sometimes very faint and hardly recognizable) or a strategically placed splash of color are painstakingly arranged underneath the transparency. These works, which one might dismiss as simple copies , are much more complex than those unfamiliar with the world of xerography might imagine. It takes a certain skill to slowly drag an image across a machine to achieve the beautiful and haunting distortion St.Lewis seeks. There is purpose to these collages, emotion and ideas are subtly conveyed using the products of modern technology.

In The Angel of History, St.Lewis xerographically widens and blurs an outline of an angel. Underneath this acetate angel, one can faintly see gondolas floating down the waterways of Venice. The subtlety of the scene beneath the angel – the calm, slow passage of the gondola- suggests the slow, subtle passage of time.

In Madonna of the Night Wing, the acetate image is a standard Renaissance Madonna and Child. Underneath the Madonna’s face and hair is a detail of the white, tan and gray feathers of an owl’s wing. The feathers intensify a feeling of tenderness and wisdom.

The Kiss is a beautiful piece in which the frame and mounting of the work adds to its validity. The acetate collage itself is rather simple and small. A close-up of Cupid kissing Psyche, with simple yet vibrant colors underneath, fills a small oval frame. The frame is mounted in the center of a much larger rectangle covered in plush red suede. The brash, large border contrasts strongly with the tender image within the oval frame.

St.Lewis’ three dimensional assemblages are masterful fusions of classical images, plaster casts of body parts and various synthetic items. The greenish-gold tint to the “skin” heightens the sense of timelessness and classical beauty, and the tensions created by the strong design reveals much about St.Lewis and his perceptions.

In I Should Have Listened to Cocteau, plaster hands and arms shield a plaster face, crowned with plastic flowers, from flames cut from styrofoam in the background. The background is a slab of slate-gray styrofoam. The piece is based on an incident in which a Russsian ballet designer supposedly asked Cocteau and Picasso at a party ” If your house were on fire and you could only take one thing with you, what would you take?” Picasso answered ” The nearest thing to the door”, Cocteau answered “The Fire”.

Mars on the Tigres-Euphrates is St.Lewis’ commentary on U.S. involvement in the Middle East. The background, an American flag, is painted in muted tones. In a narrow doorway cut from the center, the figure of a man from the waist up hovers. Wooden straws poke through his cheeks and temple. Teeth are bared, glue dripping from the dentures like the heavy thick saliva of a rabid dog. The man, leaning over a young boy, looks like s subdued monster temporarily pressed into service as a guard; the boy lies on his back, kicking. Graffitti chalked on the flag – including the words ” Yankee go Home,” a partial map of Babylon, and a seraphim-makes tangible the hatred inhabitants of the Middle East feel for this symbol of American imperialism.

The Art Critic expresses the aggravation caused St.Lewis by his adversaries. In this assemblage, a minotaur butts its horned head into a gold frame. The plaster figure within the frame breaks into pieces, its body parts jumbled. A finger catches a tear. A dislocated arm covers the head. A brown eye stares from a nipple. The background of the painting is ablaze in orange and yellow.

While St.Lewis’s materials and sources are familiar- found objects, xerography, assemblage, mythology- his work is unique because of the witty and macabre, yet beautiful ways in which these elements are combined.